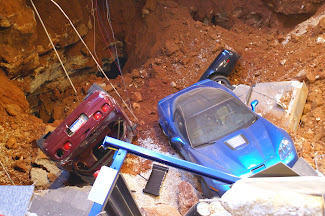 Eight Corvettes were swallowed up by a sinkhole inside the National Corvette Museum at the Sky Dome in Bowling Green, Ky. The hole is upto 40ft wide and as deep as 35ft.

Motion detectors went off at 6am and a massive sink hole was created.

The cars listed as eaten are:

Firefighters allowed the museum to remove the cars left in the dome.

Given the rarity and value of some of the cars, they will probably pulled out and restored. Sinkholes are a massive problem in Florida. I hadn’t realized that other parts of the states were also effected.

Be the first to comment on "Corvettes swallowed up in sinkhole"